Story Background
“Autofac” was originally published in Galaxy in November 1955. It can now be found in Minority Report and Other Classic Stories by Philip K. Dick on pp. 1–20. 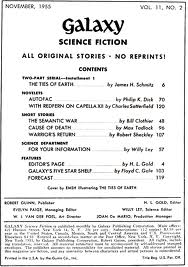 Plot Summary
Three men—Perine and Morrison from one settlement and O’Neill from another—are waiting for a truckload of supplies to arrive from the Autofac. Their goal is to convince the system of automated factories that they no longer want the goods it provides. When a truck arrives, they destroy all the crates it unloads before them. A moment later a second load, identical, is unloaded from the truck. Their next attempt is to drink milk delivered from the factory and feign disgust. This leads to a request for more information. The men write on a piece of paper that the milk is “pizzled” in hopes of contacting and confusing the Autofac. They need to find some way to shut it down.

At O’Neill’s house in the Chicago area, he explains the problem that the Autofacs cause. The system was set up before the war to be automated, but if it cannot be stopped, it will continue to consume all the resources of the planet. A robot from the factory arrived to respond to their complaint. The “factory representative” denies that the milk had any defect. O’Neill engages it in a semantic game in order to make clear that they no longer want the milk. The robot explains that with all the cows dead, only synthetic milk can be made. He also knows there is no outside production, and assures the group that production will go on. Perine, upset, destroys the robot, but this only brings in a repair crew. O’Neill reminds them that the Autofac has automated systems of self-defense and can learn. A second “factory representative” reveals that they are low on some material. O’Neill thinks that they might be able to take advantage of this. Later O’Neill and Morrison go out toward the mining area. They pass some communities trying to start from scratch, without machines. In O’Neill’s opinion, this is not possible. They need to use back orders to find out what element they are missing and collect it all themselves. This may shut down the Autofac.

The missing material is tungsten. They create a massive pile of tungsten equidistant from three Autofacs in order to attract searchers from the nearby regional factories. After one comes, five others arrive. Soon carts arrive from two of them. Detroit’s arrive late, but when they do, they begin battling with the other carts. The result of this is that the Autofacs stop producing consumer goods and shift to war footing.

After attacking each other, many of the Autofacs are disabled. Perine notices that instead of the automated factories, vines are taking over the world. Local manufacturing and food production has revived in the human settlements. They have been investigating the factories, finding many of them destroyed. Perine and O’Neill discuss opening up the factories for production, now under their control again. They enter the Kansas City Autofac to see what they can revive. They go down deep into the factory, looking for things to salvage of machines to control. Deep into the factory, Morrison feels something begin to move. They learn that the Autofac—although destroyed—has been sending out copies of itself like seeds around the planet and possible to other planets.

Analysis
“Autofac” is yet another of Philip K. Dick’s stories on the dangers of automation. It is one of his best on the subject, looking at the consequences of unrestrained consumerism on the economy. The Autofacs were set up to during an age when automation was needed for the war effort, but the production continues long after the war. Despite humans’ best efforts to shut them down to preserve Earth’s dwindling resources, they cannot deprogram the automation. This is another example of Dick’s laws of robotics. Robots (the same is true of systems, bureaucracies, and states) will do what they are programmed to do, endlessly, even past the point of absurdity. By sparking a war between the Autofacs over a limited resource, they hope to stop them. However, the automated systems were designed in war and were capable of reproducing themselves if destroyed. The end result will be the destruction of every natural resource on Earth. The “cancer” of the Autofac may go one endlessly throughout the galaxy.

The team working on shutting down the Autofacs is inauthentic. They basically want to take over the factories for themselves. A third option, always in the background of the story but constantly disparaged, are the primitive ruins-squatters and other non-technological people living on the borders of once was once a great civilization. Closer to the late Stone Age, they do not really need the metals and fossil fuels that the more urban and technological survivors desire. It is quite possible that this group will endure because they are not competing with the Autofacs for resources in quite the same way. They have even started raising domesticated animals. “To the right was a human colony, tattered scarecrows, gaunt and emaciated, living among the ruins of what had once been a town. A few acres of barren soil had been cleared; drooping vegetables wilted in the sun, chicks wandered listlessly here and there, and a fly-bothered horse lay panting in the shade of ac rude shed.” (9) It is not much, but it is a start and they may survive a world dominated by Autofacs, at least longer than others.

Significantly, Dick introduces the concept of entropy and connects it to the problem of post-scarcity. The Autofac helps humanity reach a stage where they will want for nothing, but in the progress limits innovation. The Autofac cannot develop new products, but only insist that everything matches the blueprint or the recipe. They lock humanity into a single position, forever, or at least until environmental crisis undoes what is left of civilization.

Resources
Wikipedia entry for “Autofac.” It could be worse.

Link to Kropotkin’s The Conquest of Bread.

Automated factories are part of our life.